When a private members golf club in the West Midlands was under pressure to improve the showering experience for its guests, they called on Bristan to provide a solution which would not only deliver user-friendly, high power showering but would also help to reduce the club’s water usage.

Established in 1896, Edgbaston Golf Club is one of the top private member golf clubs in the Midlands, with an 18-hole course designed by Harry Colt located just a mile from the centre of Birmingham. The Golf Club has around 800 playing and social members and offers a parkland course for amateurs and casual golfers as well as a beautiful Georgian clubhouse and facilities for corporate hire, weddings and events.

In 2015, Edgbaston Golf Club replaced the showers in its men’s changing rooms, as they found the showers were being left running, which was contributing to a hefty water bill for the Club’s operators. However, members did not like the timed showers installed, and the Club’s management were forced to look for an alternative solution.

Peter Fawcus, General Manager at the golf club, said: “We had issues with the showers being left on, so we thought timed shower units would alleviate the problem.  But the showers we had installed proved inconsistent – some would stay on for 40 seconds, others would go off after 20 seconds – and they could not deliver the required water pressure so our members were not at all happy with their showering experience. We needed to try something else.”

Having worked with Bristan on other projects at the golf club in the past, Peter contacted the company through Gas Centre, a local merchant in Solihull, and asked for their advice. Bristan recommended its TMV3 OPAC concealed shower with lever controls. 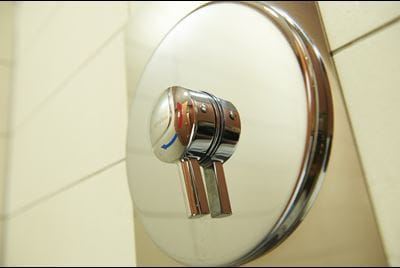 Bristan’s OPAC showers are elegantly simple, with a single sequential control for both temperature and flow and a contemporary chrome plated finish. The lever control makes the shower very inclusive as it is suitable for people with a range of dexterities, and also ensures it is particularly intuitive to use.

Peter continued: “The OPAC showers have been a great improvement to the showering experience for our members, and many comment on the pressure of the water. The aesthetics of the showers fit in well with the rest of our shower room, providing a very modern feeling, and I’m also very impressed with the functionality – in my experience, the more knobs and dials a shower has, the harder it is for people to work out so the simple design works really well for us.”

The showers were replaced over the winter, out of the golf high season, to reduce disruption to members. In total four showers were replaced. One was fitted initially, and then the remaining three were done in a day, so that members would always have a shower available for use.

To mask the holes in the tiling created when the timed showers were taken out, Bristan worked with the Club to source bespoke concealing plates for a flawless finish.

Peter concluded: “The new showers have been a great improvement to the Club facilities, and our members are very happy to have showers they can turn on and off again as required. Although they don’t offer the same water savings as the timed showers, the OPAC showers do have a flow limiter to help reduce our water usage, and we have satisfied customers again so I think we have managed to find a good compromise.”
For safe showering, the OPAC valves at the Club are fitted with thermostatic mixing valves, which provide an automatic shut off in the event of hot or cold water failure.  This reduces the risk of scalding and helps the golf club to fulfil its duty of care to members. For easy maintenance, the units come with check valves and serviceable filters as standard, plus a 1-year guarantee.

Dan Winchester, head of commercial sales at Bristan said: “When it comes to providing showering facilities in a commercial setting, it’s important to find a solution that meets the expectations of the users as well as meeting the needs of the operator. At Edgbaston Golf Club, we were able to provide a practical and stylish solution which could be quickly installed before the peak golf season began.”

Please provide your name and email address below, your wishlist will be emailed to you.

Please provide your name and email address below, your wishlist quote will be emailed to you in coming days.

BUY FROM ONE OF
OUR ONLINE PARTNERS

Unfortunatelly there was an error while dealing with your request. Please try again later.

Your personal details are important to us. We will only process your data in a fair and lawful way and your details will never be passed onto third parties. We would like to continue to send you information about relevant products, news and services from Bristan Group. Please indicate how you would like to receive future communications from us in the future: