Bristan has teamed up with the experts at Plumb Center to offer a season of wow-factor sporting experiences, with four VIP tickets up for grabs during each month of the promotion. 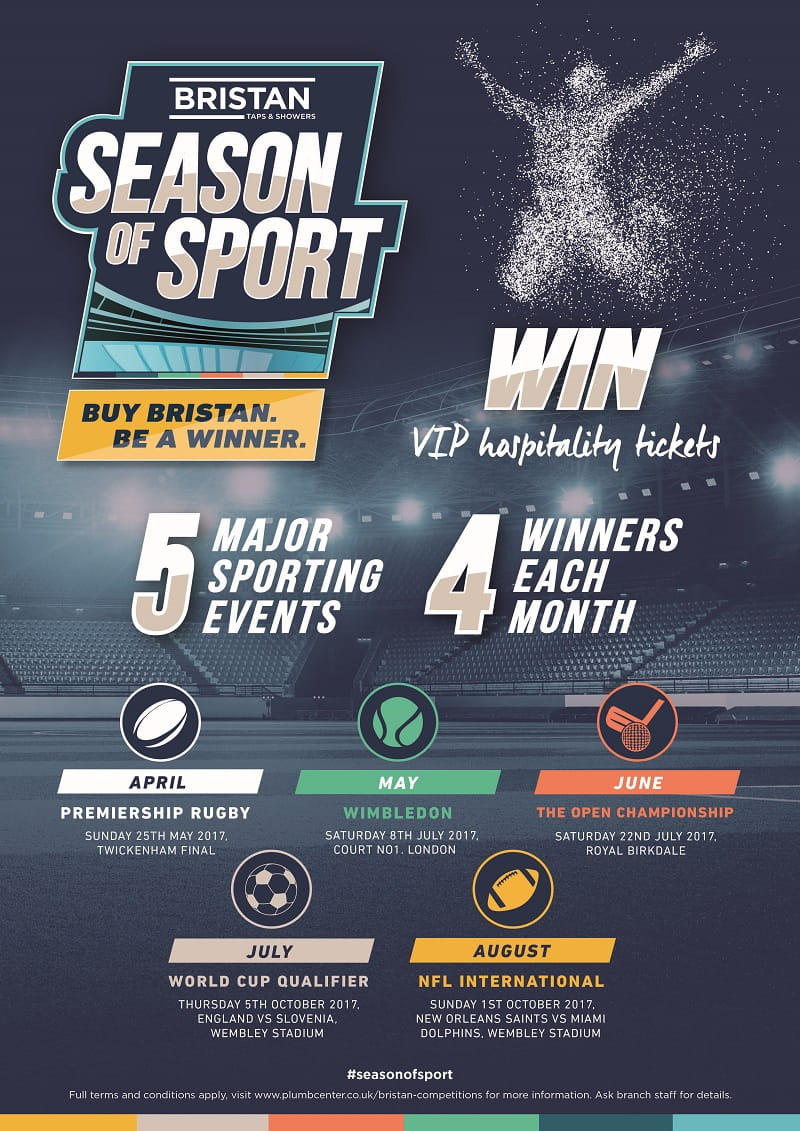 Kicking off on 1st April until 31st August 2017, Bristan’s ‘Season of Sport’ promotion incentivises installers by automatically entering them into a monthly draw when purchasing Bristan’s taps or showers at Plumb Center.*

Each winner will receive a VIP hospitality experience at one of five major sporting events taking place throughout Plumb Center’s Plumbing Season. These electrifying events include the Premiership Rugby final at Twickenham, Wimbledon, The Open Golf Championship, World Cup Qualifier England vs Slovenia, and the NFL New Orleans Saints vs Miami Dolphins both at Wembley Stadium.

Craig Rendall, merchant sales director at Bristan, comments: “As a company which keeps its customers firmly at the heart of its operation, we are thrilled to launch our ‘Season of Sport’ promotion, recognising and rewarding our most loyal installers. At Bristan, we know that good business is all about teamwork and we pride ourselves on how we work together with our installers, so what better way to reward them than with tickets to some outstanding UK sporting events.

“We’ve teamed up with Plumb Center, one of the UK’s leading suppliers of plumbing and heating products, for what is our biggest promotion to date, and hope as many installers as possible get on board for their chance to win some fantastic prizes.”

Richard Redfern, category director at Plumb Center, adds: “This is a very exciting promotion and we’re delighted to be partnering with Bristan to offer these luxury sporting experiences to our customers. Each month, we will be offering the chance to win VIP tickets to some of the most highly anticipated sporting events of 2017 and would encourage anyone interested to come into branch or one of our showrooms nationwide from 1st April and take advantage of this exclusive promotion.”

To take part, installers need to simply purchase a Bristan tap or shower from Plumb Center between 1st April and 31st August.

To find out more about Plumb Center visit www.plumbcenter.co.uk

Please provide your name and email address below, your wishlist will be emailed to you.

Please provide your name and email address below, your wishlist quote will be emailed to you in coming days.

BUY FROM ONE OF
OUR ONLINE PARTNERS

Unfortunatelly there was an error while dealing with your request. Please try again later.

Your personal details are important to us. We will only process your data in a fair and lawful way and your details will never be passed onto third parties. We would like to continue to send you information about relevant products, news and services from Bristan Group. Please indicate how you would like to receive future communications from us in the future: